Posted by Hunter Regional Committee of the National Trust at 8:51 PM 1 comment: 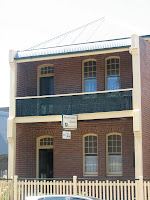 When newly weds Herbert Porter and his bride Florence Jolly moved into their new home at 434 King Street Newcastle, in 1909, their thoughts would probably have focused on the here and now, the need to cultivate their general store and carrier business in nearby Bland (now Hunter) Street. They would have pondered too the prospect of starting a family, because Ella was born in 1911 and Hazel in 1914. Sadly, Herbert, and his mother Eliza (neé Lintott), fell victims to the influenza epidemic in 1919, and Florence was left to raise the two girls.
Little would the Porters have imagined then that their house would, one hundred years letter, be a National Trust House. But as they aged, the daughters, who never married and lived in the house all of their lives, entertained an ambition to bequeath the house to the National Trust. This ambition was realised following the death of Hazel in 1997. Ella had died two years earlier. Miss Porter’s House now stands as Newcastle’s only National Trust property.
The Friends of Miss Porter’s House plan a number of events to mark the centenary of the House. In particular there’ll be a Centenary Fair on 30 May 2009. NTA members with Antiques, Arts and Crafts and Collectables to sell at the Fair are invited to contact Patti Graham (4953 9034).
Other Miss Porter’s Centenary events will be publicised from time to time in the National Trust NSW eNews.
THE HOUSE WILL BE OPENED ON SUNDAY 8 FEBURARY 1-4pm, 434 KING STREET, NCTLE
Posted by Hunter Regional Committee of the National Trust at 2:36 PM No comments: 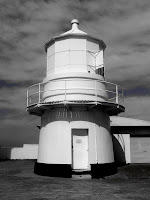 The Nobbys-Whibayganba Headland development proposal must remain a ‘Controlled Action’ by the Commonwealth, as the new development and use proposed on the headland will impact on the heritage values of the historic Nobbys Lighthouse.
The National Trust of New South Wales has been advocating for the conservation of this area since 1969 when we proposed the statutory recognition of Nobbys, the convict breakwater and mines, Fort Scratchley and Shortland’s camp location as a historic site. The area is now known as the Coal River Precinct and registered on the State Heritage Register. It is essential that the Commonwealth considers this current proposal a ‘Controlled Action’ because of the lack of heritage protection that the precinct currently has, especially in regard to the Nobbys Headland and the area directly around the Nobbys lighthouse. The heritage values of the lighthouse remain under threat from private development.
Now that the Newcastle Port Corporation has exited the site, it should be transferred to the National Parks and Wildlife Service, which would ensure permanent heritage conservation management. NEW DEVELOPMENT is planned for the headland and this is contrary to the Newcastle Port Corporations officially published invitation for expressions of interest (Port Corp. May 2003).
Reasons why the current proposal needs to be reconsidered:
• The proposed plan dominates Nobbys for private benefit with limited access by the public.
• The proposed plan would physically impact on the headland and the adjacent Macquarie Pier with increased vehicular traffic and waste and sewage management.
• There is no adaptive reuse to improve heritage values for the benefit of the public.
• Ongoing control of hazards and access by private and service vehicles is not adequately considered.
• Archaeological examinations have not been undertaken.
• Newcastle Port Corporation previously acted contrary to Commonwealth Law s26 EPBC act, and also carried out action without consent on the roadway to the headland.
• Because the Proponents have previously been in breach of s 26 of the EPBC Act, this proposal should remain a ‘Controlled Action’.
There must now be developed an overall vision and plan for Nobbys headland that is in the public good that ensures permanent heritage conservation management.
Please write to:
Hon Peter Garrett AM MP Minister for the Environment, Heritage and the Arts, PO Box 6022
House of Representatives Parliament House Canberra ACT 2600
The Hon. Nathan Rees MP Premier of NSW, Parliament House, Sydney 2000
Posted by Hunter Regional Committee of the National Trust at 10:52 PM No comments: