The 2009 Harry Boyle OAM Heritage and History Lecture will be presented by Dr Janis Wilton OAM, Associate Professor of History at the University of Armidale. The title of her lecture is "A Night at the Museum", with a subtitle of "How local museums and local history, collections and research can bring the past alive." The Lecture will be held on Friday, 25th September, 2009 at Brough House, Church St, Maitland at 6pm. Drinks and savouries will be served prior to the lecture. The cost is $20 for National Trust members and $25 for non-members. Bookings are essential as numbers will be limited and may be made to Ian on 49320518 or Grossmann House on 49336452 or Email : ianlynn@idl.net.au.
Posted by Hunter Regional Committee of the National Trust at 4:18 AM No comments: 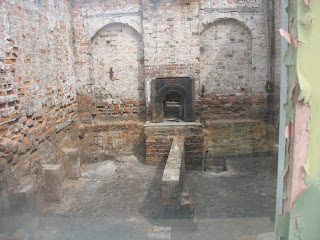 PHOTOGRAPHS: Newcastle Parsonage circa 1819- before & after demolition

Last year our annual meeting strongly supported further heritage protection of historic James Fletcher Hospital in Newcastle. We are pleased that a nomination has been submitted to the National Trust’s Heritage at Risk Program. The Newcastle Government House and Domain is significant to the colonial history of NSW and is a cultural landscape that is closely linked with convictism and the Macquarie period. The site has been in Governmental management from 1804 to the current day and is also closely associated with the history of Australian coal mining (the first commercial vertical coal shafts worked, using convict labour - 1814-17).
Convict labour was used to quarry this area for the construction of the military barracks and parade ground in the 1830s. These military buildings (circa 1842) remain on the hospital grounds and have been used as a mental health facility since 1871 until recently. However, in June 2009 most mental health services were relocated and there is now an urgent need to ensure that the military buildings continue to be maintained and occupied.
Most of the old parsonage (circa 1819) also on the site were demolished in June 2009 (see photographs above, before & after). Although an archaeological investigation was undertaken, the committee would like to see a meaningful interpretation of the relics that remain. Unfortunately the parsonage (also known as Reception House) was not on the State Heritage Register. The former Minister for Planning gave consent for demolition in 2007 using Part 3 of the EP&A Act, after Newcastle Council had refused consent. There was nothing conservation groups could do to halt demolition.
It is essential that the heritage significance of this convict, mining and military site be fully acknowledged. The Committee has recently submitted a State Heritage Register nomination for this special cultural landscape.
CURRENT THREATS
*Currently many buildings are empty- although gates have been erected there are threats of vandalism
*Maintenance tradesman have moved off site
*No publicly reported future plans have been announced for the hospital
*No Archaeological report has been publicly available-re Interpretation of Parsonage
*Why is there a need for a new 20 bed facility on the old parsonage site when the Thwaites building (circa 1990) sits empty.
*Is puzzling why the Shortland Clinic is going to be demolished, what is the site being prepared for?

The Committee cares about the future of Newcastle.
How can we bring our caring attitude into the decision making that is shaping our future?
The only political machinery available is to identify through the State and National listing process the essential values and knowledge that we want to hand on to the people of tomorrow.
It is important that the Community supports the nomination for State and National Heritage Listing of the existing James Fletcher Hospital and Newcastle’s former Government House site and its historic surroundings.
This area is quintessential to understanding the beginnings and development of our city of Newcastle.
The James Fletcher Hospital site and the former Government House site in Newcastle should continue to remain in public ownership for the education and use of the People of New South Wales and Australia
Posted by Hunter Regional Committee of the National Trust at 11:53 PM No comments:

12 September, 3pm – 5pm at the 'Lock Up' Hunter Street
Public Lecture Solitude of Sighs, Laila Ellmoos.
“We were a miscellaneous lot: murderesses and pickpockets, abortionists and shop-lifters, thieves and robbers, drunks and vags.” Rebecca Ross 1908.
This lecture expands on scholarly and popular understandings of the NSW prison system from the perspective of those who spent time ‘doing time.’
Laila Ellmoos is a professional historian based in Sydney and currently historian for the NSW Government Architect’s Office.
Off the Beaten Track is an initiative of the History Council of NSW for History Week 2009.
Bookings essential 4925 2265.
Posted by Hunter Regional Committee of the National Trust at 11:41 PM No comments: