Local Treasures 1233ABC Radio-   Miss Porters House Collection             26 August 2014
Presenter: Carol Duncan
Interviewee: Ann Hardy
Miss Porter's House is a National Trust property in Newcastle built in 1909.  The house, grounds, interiors and contents are all intact and the property was continuously occupied by the Porter family for over ninety years. The house retains many original features and represents the Edwardian era and example of urban lifestyle in what was otherwise the early business of Newcastle. Other ephemera include accounts and invoices that tell a story of paper based finance keeping. There are two layers of interior decoration, firstly the original 1909 fit out, and secondly furnishing of the 1930s. The stencilled timber ceilings, fine Queensland maple staircase, art deco rugs, linoleum, and art deco light fittings are all historic features.
In the early 1860s, the seventeen year old James Porter travelled from his native England, emigrated first to New Zealand, then a few months later to Newcastle where he, according to his obituary in 1919,  ‘took up his residence in the islands of the Hunter River, where he engaged in farming pursuits.’  Here he married a local woman, and together they set up a business in Blane (Hunter) street opposite the Carrington Bridge.  He married Eliza Lintott and, by the early 1880s, was ready to set himself up as a general storekeeper and carrier in Blane Street (now Hunter Street West). Here he and Eliza reared their family, while James became a well-known figure in local business and social life of the community.
﻿﻿

﻿
﻿﻿﻿
After 1879 they moved  to a terrace shop in Hunter Street, fronting Honeysuckle Station (no longer there), which would have been directly behind Miss Porter’s House. A photo of the house found in the Miss Porter’s House collection, shows the store probably c.1890. The photo from the MPH collection had the notation, ‘James Porter’s Store is now Thorpe & Co, 483 Hunter St. Newcastle The photo shows James Porter as ‘Fruiterer and Grocer.’ The family lived in the house.
From the images we can see goods for sale including jugs, vegetables and a parrot in a cage. The shop next to it was leased to various businesses over the years. Around 1890 the lessee was E Banfield, Draper, and later James Blewett Saddlers.
When James Porter died in 1912, the business was valued at £6200 plus £319-5-0 for horses and wagons and was passed onto his son, Herbert, who ran the carrier business.
This photo is of the cart and men near Islington Park. They’re ready for a May Day procession, date unknown but probably after 1912.

In 1906, James Porter purchased from the Australian Agricultural Company an allotment of land facing Langford Street and at the rear of his shop for 350 pounds. This was conveyed in 1909 to his second son, Herbert Porter and his new wife, Florence Evelyn Jolley, of Singleton who establish their own home and family. In 1910, Herbert contracted J T Orpen to build his house for 498 Pounds. The final payment in December 1909 included 14 Pounds for extra gas fittings. A few early photographs tell us about Herbert Porter (the father of the Porters sisters) and the family business.


'Miss Porter's House' has always been a distinctive Edwardian home in an otherwise non-residential area. It stands on land known prior to its subdivision as 'Lock's Paddock', a stonemason's yard. The extensive buildings of the Gas Company occupied most of the land opposite while the Steel Street produce markets and homes of the Chinese market gardeners were in nearby Devonshire Street. As the century progressed, the industrial nature of the area gave way to commerce and administration. However Miss Porter's house remains as the sole residential building.
In the aftermath of World War 1, a serious epidemic of influenza swept the world. Australia was not excluded and among the Newcastle victims was Herbert Porter, aged only 41 Years (in 1919). Florence Porter and her two daughters Ella and Hazel, the latter only five years old, were left on their own. These were sad years for the family. Eliza, Herbert's mother died in July 1919 and his sister, Elsie May followed in September 1921.
﻿

The Porter sisters went to Cooks Hill Public School, then Hazel to Cooks Hill intermediate school, and Ella to Wickham Domestic Science High School. Hazel Porter worked as a secretary/clerk most of her life. She received typing and Pitmans shorthand certificates in 1931. Early casual jobs included the Melbourne Steamship Company (relieving typist for 2 weeks at a pound a week), United Referendum Campaign (1933), Merchants and Traders Association for 16 years then for a debt recovery agency - Commercial Protection Services, most of her life. She retired in the mid 80s.
Ella Porter worked for an accountant, Australian General Electric Company, Miss Johnson's Doll Shop and a hat shop. Miss Porter's House became the lifelong home of the two daughters, neither of whom married. Here the Porter siters, Ella Baldwin and Hazel Mildred Porter would live until their deaths. Florence Porter died in August 1970 at the age of 91, after a long widowhood of almost 50 years. Ella and Hazel continued to live at 434 King Street where, in 1975, they renewed the bush house.  Ella died in 1995, aged 84 years leaving Hazel to continue alone in the house until her own death in 1997, and aged 83.

Prior to her death, Hazel contemplated the future of the family home. The inner-city site had been long sought for redevelopment; however Hazel decided to bequeath the house, its contents and an endowment to the National Trust of Australia (NSW).
Since 1997 National Trust of Australia (NSW) Volunteers have maintained the building itself, the gardens and valuable collection of artefacts houses there, raising money towards its upkeep.
Nearly all the objects and documents in the house are now safe and secure. It’s taken 16 years, with a particular effort the last four years to categorise about 8000 items. Each have been tagged and labelled, scanned or photographed and protected in archival quality sleeves. Each object or document has been described, measured, a condition report carried out, and information documented.  Two grants from the Museums NSW has allowed the National Trust to buy archival quality materials. 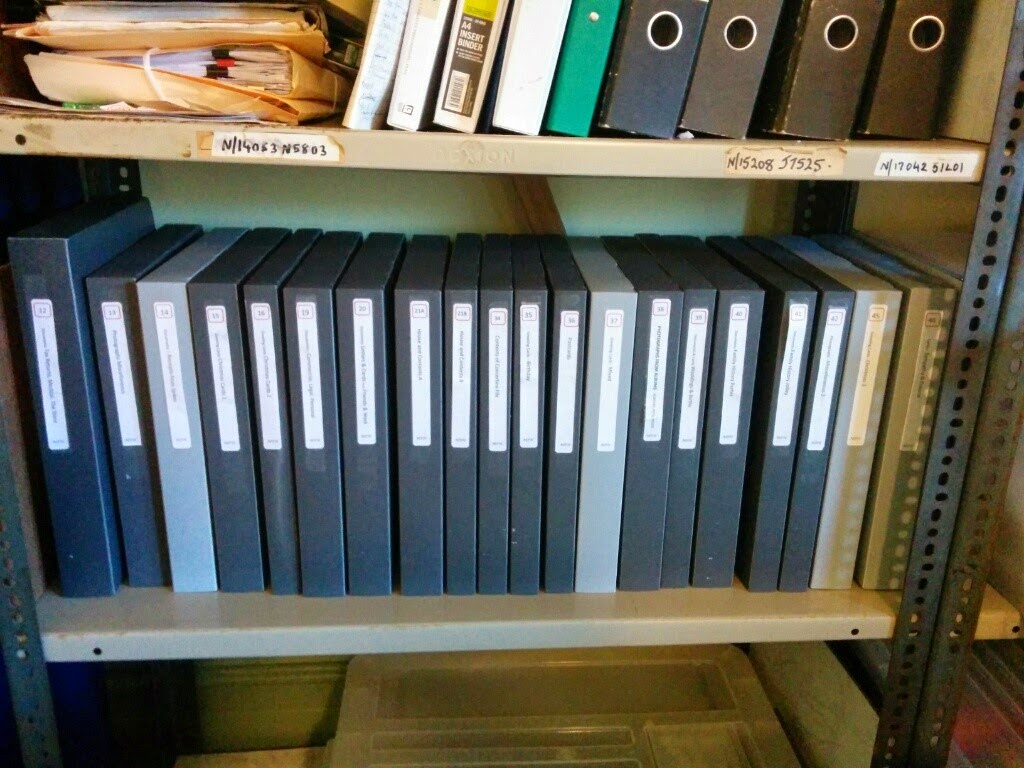 This detailed inventory of the house will eventually be uploaded to the National Trust database and made available to the public.  Other important information about objects is documented on a computer program to further understand the Porter family, the local area including businesses, and other changes to the local area.
A small part of the collection is photograph and postcard albums dating back to 1903. Postcards were a quick way of communicating, and many were hand painted on celluloid. 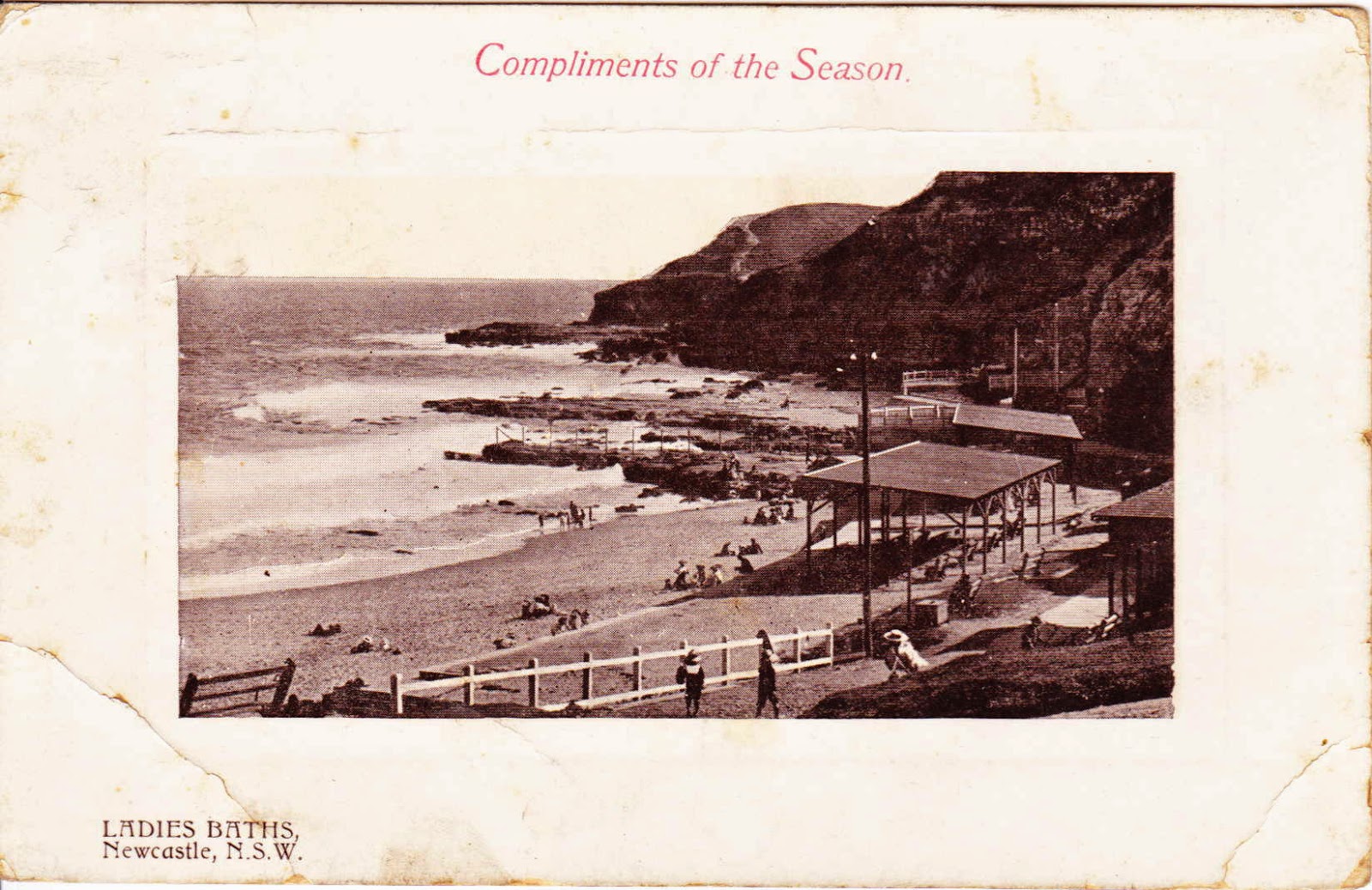 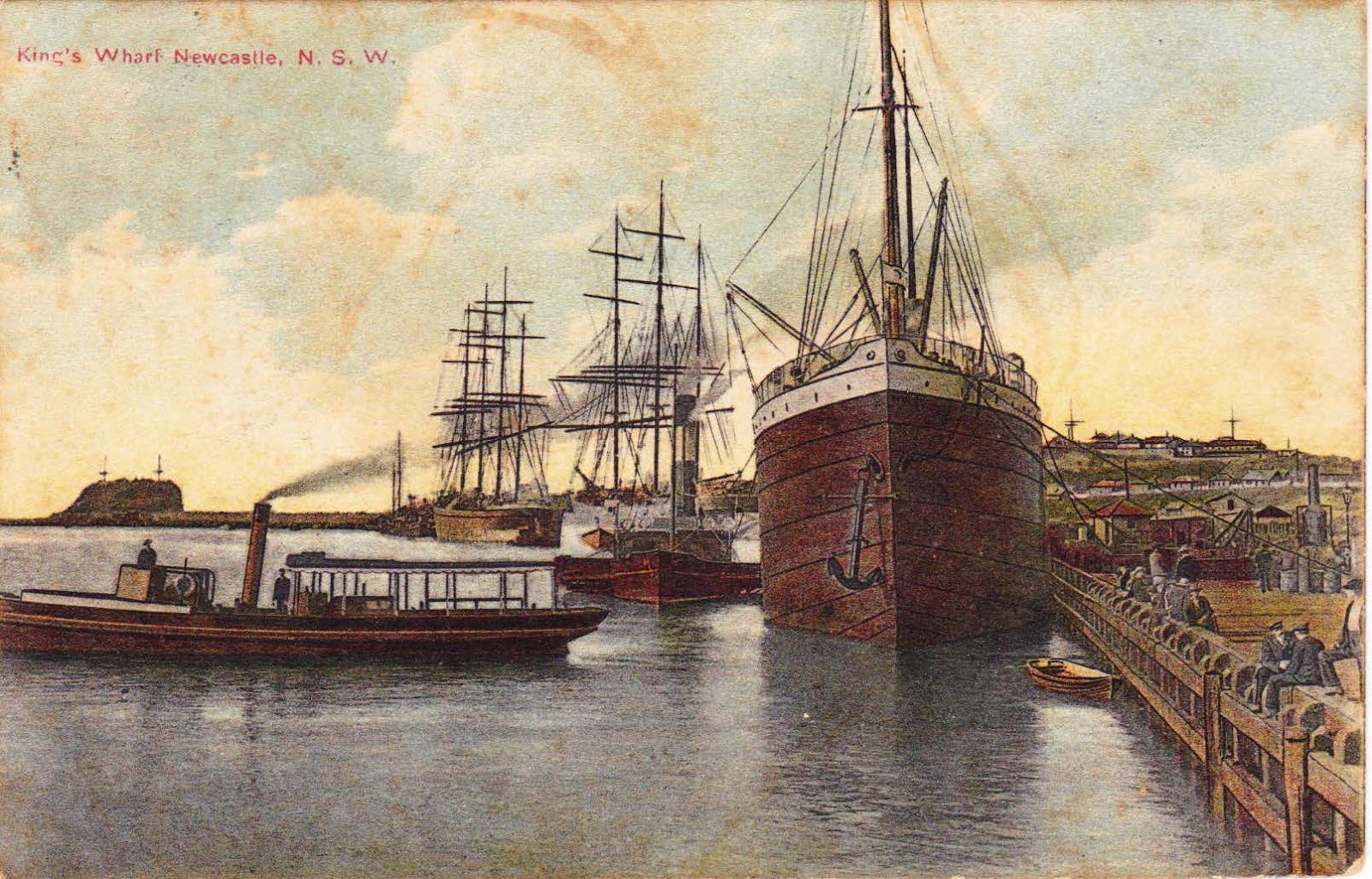 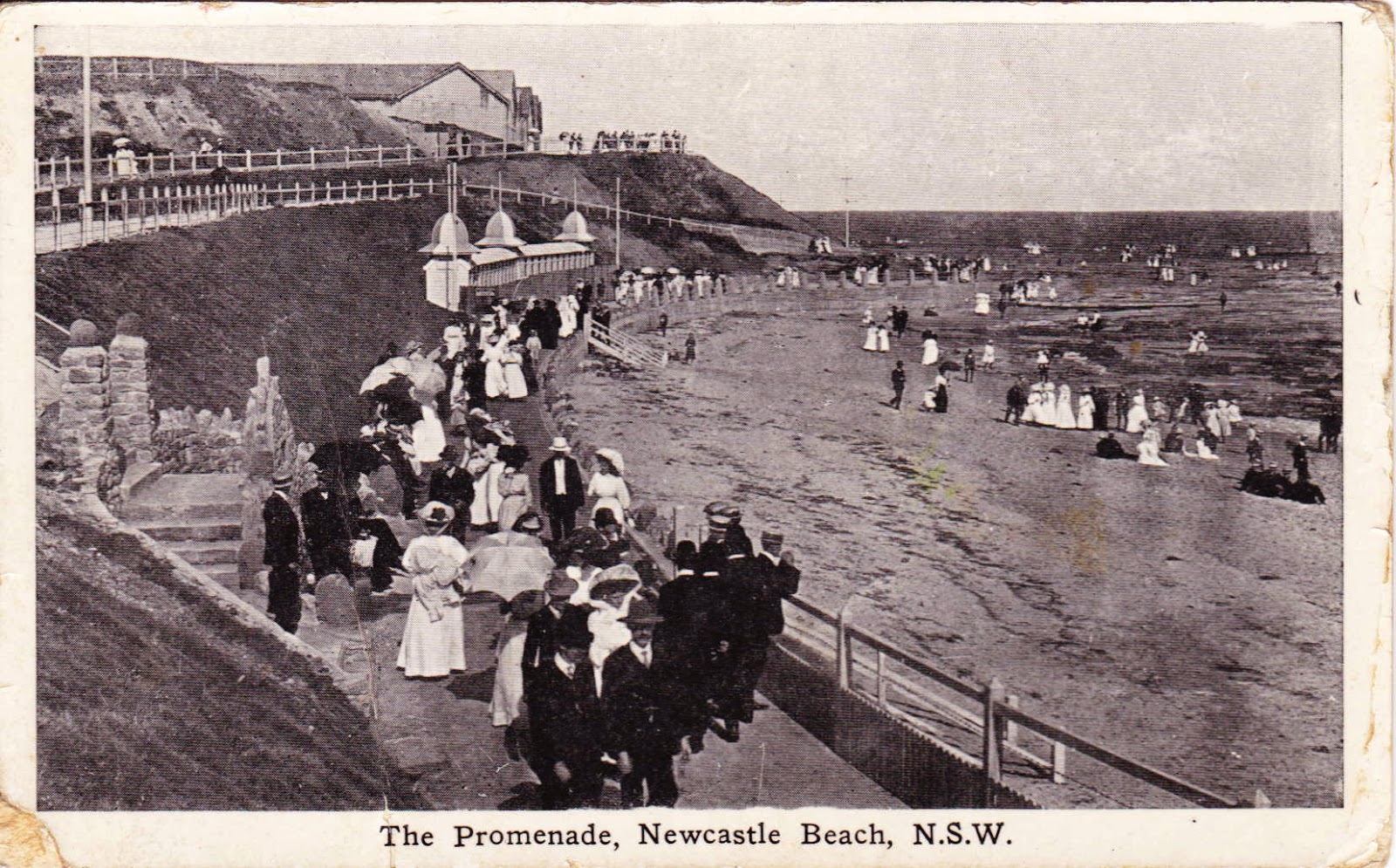 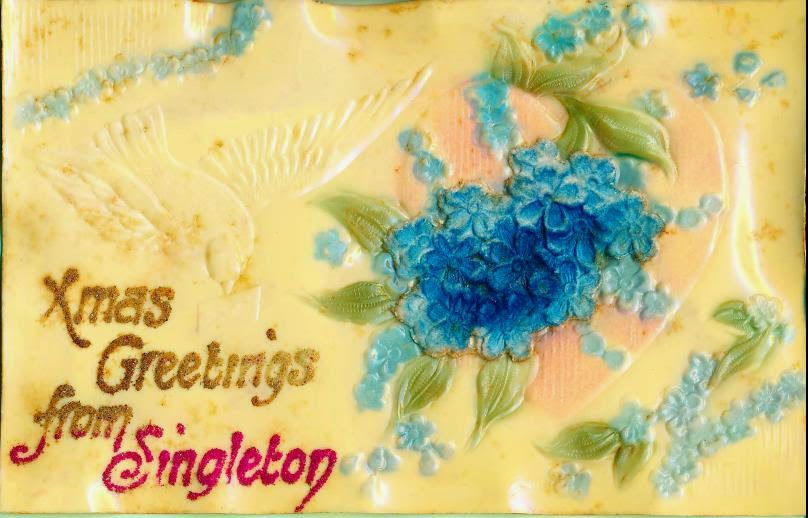 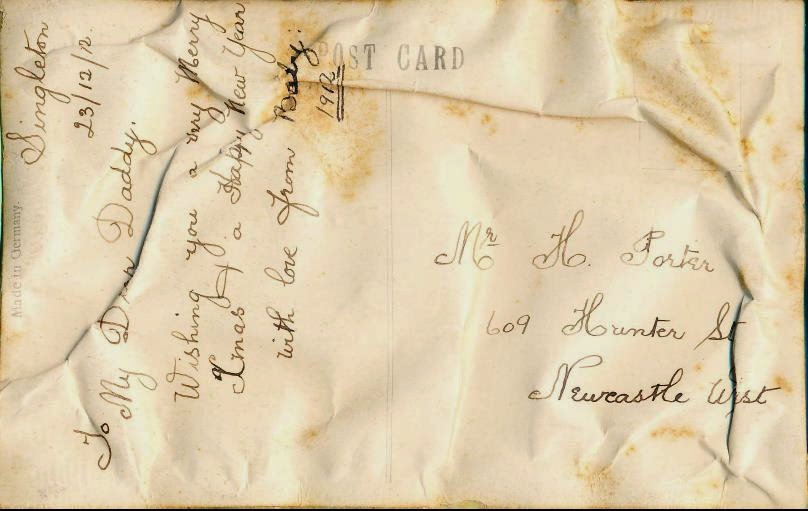 The photos in the collection are for the large part, family snaps. The sisters didn’t travel widely, but did take photographs of the local areas, and their trips to Sydney and Katoomba.

Hazel Porter kept a detailed record of their trips around Newcastle and the Hunter Valley during the 1950s. Other photos provide significant information about the history of the family.


The photographs in the collection document big and small events from the 1927 flood of King Street to birthday parties in the back yard.

Miss Porters House is happy to share digital copies of photographs from the collection.  They occasionally post to the Lost Newcastle Facebook page, particularly when they are trying to date or identify a landmark.

Thank you to all the volunteers at Miss Porters House for their contributions in caring for this collection, special thanks to Pam Marley for providing images and information for this story.