Congratulations to our three wonderful speakers who gave fascinating insights into the Macquarie era and stories of those associated with the Colony and Governor Macquarie. The bicentenary of Governor Macquarie is being celebrated this year and this event was an official Macquarie 2010 Commemorative event. Dr Grace Karskens from the University of New South Wales spoke about the influence of Macquarie's wife, Elizabeth, on his famous building program and vision for the colony generally; Mr. Robin Walsh, librarian/curator for The Lachlan Macquarie Room, Macquarie University Library, explored Macquarie’s character through the eyes of his Indian manservant 'George' whom until now has not been fully researched, and Lisa Slade, Curatorial Consultant at the Newcastle Regional Art Gallery was dynamic in her talk about the wonderful Macquarie Chest , a “collector’s chest”, regarded as the holy grail of Australiana that was almost certainly made in Newcastle in 1818 with painted views of the area. Thank you also to Dr Josephine May (Senior Lecturer Faculty of Education and Arts at The University of Newcastle) who did a great job at chairing the evening and to Prof Maynard(Head of School of The Wollotuka Institute The University of Newcastle, Australia) for conducting welcome to country.

High Tea with Mrs Macquarie at Monets’, in the grounds of the James Fletcher Hospital.

Those who attended High Tea last Saturday afternoon would agree that it was a beautiful afternoon. It was a pleasure to have the company of Lady Macquarie and she was generous enough to present the Inaugural Australian Bonafide History Awards to the many winners. The event took place at Monet’s (former Military Hospital, built in 1842) in the grounds of historic James Fletcher Hospital. Governor Macquarie and his wife Elizabeth stayed nearby at the Government House in 1818 on their visits to Newcastle.

Many thanks also to Mr John Carr (Heritage architect) who provided an enlightening overview of the sites history and the significant heritage buildings there. It is truely an extraordinary site, rich in convict and mental health history. Congratulations to all of the winners of the various categories of the Inaugural Australian Bonafide History Awards, the awards were sponsored by the Hunter Heritage Network. There were two joint winners of the Perpetual Bonafide Award recognising the excellence in the writing of, promotion, or documenting of local and regional history. These went to Mr Ed Tonks and Ms Margret and Mr Carl Doring.

Posted by Hunter Regional Committee of the National Trust at 6:35 AM No comments:

In the Footsteps of Macquarie Walk

Members of the National Trust & Newcastle University’s Coal River Working Party took a group for a new informative walk from Macquarie Pier to Christ Church, tracing Macquarie’s ambitious building program that helped to transform Newcastle from a convict camp to a township. Our new portable PA system made a tremendous difference. Thanks also to Suzanne Martin for providing her knowledge and stories of the Newcastle Hospital, and to Dr Brian Walsh for his input regarding convict history of the area. Some of the participants picniced with Lady Macquarie after the walk.
Posted by Hunter Regional Committee of the National Trust at 6:19 AM No comments:

The Making of Our Nation: Art Exhibition 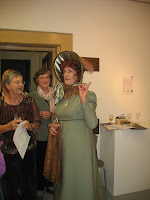 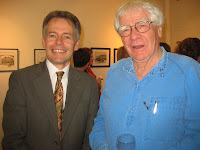 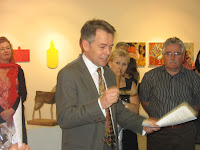 Congratulations to all of the artists who were invited to interpret ‘The Making of Our Nation', this years National Trust festival theme. This is the third Hunter National Trust art exhibition and we would like to thank those who contributed the event, as well as Mr Ron Ramsey, Director of the Newcastle Region Art Gallery who opened the exhibition on Friday 9 April.
Also Lady Elizabeth Macquarie made an appearence.

Posted by Hunter Regional Committee of the National Trust at 6:10 AM No comments:

The National Trust of New South Wales has been advocating for the conservation of this area since 1969 when we proposed the statutory recognition of Nobbys, the convict breakwater and mines, Fort Scratchley and Shortland’s camp location as a historic site. The area is now known as the Coal River Precinct and registered on the State Heritage Register (SHR 1674).
Although the Nobbys development proposal is significantly different and much improved to the previous one, with less direct impact to the historic lighthouse, there remain concerns regarding the safeguarding of the natural and cultural heritage of the area. The current proposal plans for a 46 seat restaurant, 7 luxury units, manager’s residence in signal station and take-away outlet. The public area of this site will be enclosed with a 1.8 metre high glass fence inside the existing perimeter wall of the headland, possibly obstructing views and compromising the character of the headland.
Furthermore, this proposal will add a level of luxury to the site that has never existed, and will diminish the remote character of Nobby’s and its iconic status.
The following are some of the Trusts concerns:
• The proposal does not comply with the Newcastle Port Corporations Expressions of Interest document- adaptive reuse. One of the objectives of the Port Corporations EOI stated: - To protect and enhance the site’s historic, aesthetic and social fabric for the future benefit of the Newcastle community; the proposal does not outline how this will be achieved. Any use for the site should contain a strong historic and archaeological interpretation strategy including Aboriginal, military, maritime and social themes.
• The Corporation’s objectives could be met without changing the existing footprint of the buildings. No new development should occur on this historic headland particularly if it obstructs the views from the courtyard and lighthouse access. The proposed new residential units would diminish the character of the site and will have a permanent and irreversible impact on the heritage values of Nobbys. This proposal is not adaptive reuse as stated in EOI objectives.
• This proposed development would dominate Nobbys for private benefit with limited access by the public. We also believe that public access to Nobbys (as potentially an important National heritage site) will be severely impeded by vehicle movements along the breakwater, which will discourage pedestrians (visitors to the site). Public access to the site could be achieved without the development occurring at all.

1. In regard to the proposed DA the Trust recommends: - That no new residential development occur and that there is no new residential unit attached to the proposed restaurant, that this would obstruct the views from the courtyard and lighthouse access. This new work is not planned to be reversible. The new residential units would further alienate the site and prevent access and views to the south. We approve of the demolition of the 2 garages. The public area of this site will be enclosed with a 1.8 metre high glass fence inside the existing perimeter wall of the headland, this will possible obstruct views and compromise the character of the lighthouse and headland. Furthermore, an interpretation strategy should be prepared.
2. Nobbys headland to be transferred to the National Parks and Wildlife Service (NPWS) to be managed under the National Parks Act as an historic site. Many lighthouses in NSW are managed by the (NPWS) and this provides a heritage conservation regime that has a statuary requirement for permanent heritage conservation management.
3. National Heritage management principles are necessary to adequately manage this historic site. Nobbys Lighthouse is a Commonwealth Heritage place and the Coal River (Mulubinba) Cultural Landscape National Heritage Nomination was submitted in February 2009 (currently with the Department of Environment, Water, Heritage and the Arts for consideration). The Trust urges Minister Peter Garrett to select nomination for the 2010-11 workplan- and for it to be considered for National Heritage Listing.
Posted by Hunter Regional Committee of the National Trust at 3:44 PM No comments: