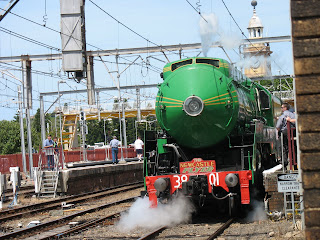 Don Hagarty, former railway engineer and well known railway historian, will be presenting an Engineer's history of the first two public railways constructed in NSW with particular reference to the Newcastle to West Maitland railway.
He frequently lectures on railway subjects and has written articles and books. Most notably, in 2005 Don wrote the book “Sydney Railway 1848-1857” which was launched on the 150th anniversary of the NSWGR. As a follow-up to this, he has been researching and is writing a similar book for the Hunter River Railway from Newcastle to West Maitland which opened in 1858. The early history of the engineering & construction of these two railways will be the subject of his talk.
Date of talk: Thursday 8th October 2009
Time: Refreshments at 5:30 pm. Presentation at 6:00 pm
Location: Engineers Australia Auditorium: 122 Parry Street, Newcastle West
RSVP: to Katrina Baker at the Newcastle Division Office on 02 4926 4440 or kbaker@engineersaustralia.org.au by Tuesday 6th October 2009
Posted by Hunter Regional Committee of the National Trust at 3:25 AM No comments: 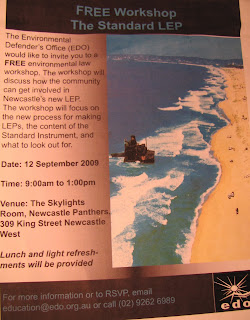 The Hunter Regional Committee of the National Trust wishes to promote the Environmental Defenders Office workshop to be held at the Newcastle Panthers (Skylights room) in Newcastle.
Saturday Morning 12 September 09.
Time: 9.00am to 12.00noon + Lunch to 1:00pm
The workshop will focus on opportunities for public participation in the new process for making LEPs and also consider the content of the Standard Instrument and what the community should look out for when commenting on new planning proposals.
For more information or to RSVP, email education@edo.org.au or call (02)92626989
Posted by Hunter Regional Committee of the National Trust at 2:38 AM No comments: