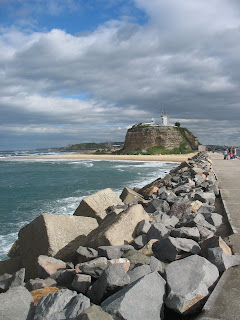 The Hunter Regional Committee of the National Trust supports the nomination of the Coal River Heritage Park to be selected for National Heritage listing. This precinct is a unique national heritage site which has a rich early European and convict history and shows the transition from penal settlement to civil society.
The proposed Coal River Heritage Park marks a series of important transitions in Australia’s journey to nationhood; from government industry to private enterprise, from convict to free labour, from punishment to profit, from a natural to a human-fashioned landscape. The Coal River Heritage Park tells these stories in a dramatic fashion; through its changing landforms shaped by the demands of industry, through its archaeological remains in tact and in situ, and through the continued and inescapable presence of a bustling working harbour.
The area retains significant natural and cultural landmarks including Nobbys Head, Flagstaff Hill, Newcastle Harbour and the Hunter River. These landmarks are of outstanding heritage significance for both Aboriginal and non-Aboriginal people. At the heart of Newcastle city, the Park is filled with people daily, and represents a remarkable fusion of heritage and the everyday. Such a highly accessible and culturally-valued landscape allows for a creative engagement with its Aboriginal and non-Aboriginal heritage. The National Trust has a long history in supporting conservation of this area.
Posted by Hunter Regional Committee of the National Trust at 3:22 AM