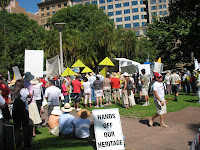 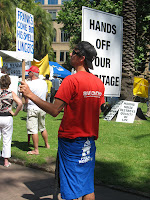 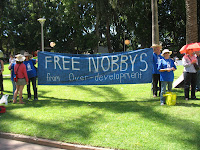 The RAID (Residents Against Inappropriate Development) Rally at Hyde Park in Sydney was a roaring success. There would have been about 1000 people there with representatives from 30 groups around NSW including the Hunter Regional Committee of the National Trust and Parks & Playgrounds Movement. All of whom are furious about the recent amendments to the EPA Act (Environmental and Planning Act, 1979). In particular, the Part 3A Critical Infrastructure amendment is the most abhorred by community groups as it takes away the rights of local government and communities to have a say in developments. Deals behind closed doors have to stop! Furthermore, once the Planning Minister approves a development, there will be no right of appeal under Part 3A. Jack Mundey, long time activist and union leader who was instrumental in the 1970s for issuing Green Bans across the country from Freemantle to Hobart - as well as getting the EPA Act (1979) enshrined in law to protect our environment and built heritage spoke passionately at the Rally and said "This is a replay of what happened in the 1970s, when people like you took up the cudgels to get the first heritage legislation in this country. This is the worst government since the Askins Government as far as our heritage is concerned. We need to force the government to repeal the laws." Sylvia Hale of the Greens said that we are affected by the appalling development decisions which undermine the Planning Act as well as community access. The property development industry poured millions of dollars
into the Labour Party coffers and they spent it on TV ads. 12 months after elected they introduced "reforms" to the planning laws based on the latest wish list of the development industry.Other speakers included Robert Stokes of the Liberal Party, Peter Stuckberry of the Royal Institite of Archtecture, Brad Hazzard, Julie Cook of the Hill Top Residents Action Group, Shane Withington of Friends of Currawong, The National Trust and Tony Rescie who put forward a motion, seconded by Jack Mundey, calling on the Rees Government to revoke all legislation which forces unacceptable high density development on local communites as well as Part 3A of the EPA Act amongst other demands. The speakers were warmly received by the colourful crowd who brandished placards and banners demanding rights for communities and the environment. Peter Stutchbury observed that there was a distinct lack of young and indigenous people in the crowd, and stressed the importance of fighting these issues hand in hand with the traditional caretakers of this country. He quoted an Aboriginal elder who said "Why are you digging up the ground? We have walked this land for 60 thousand years; that is our library you are digging up."
Posted by Hunter Regional Committee of the National Trust at 4:25 PM

More pictures and articles at www.friendsofcurrawong.com

Thanks for your support for the RAID rally.