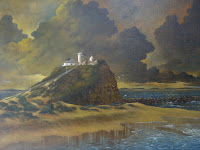 Minister for the Environment, Peter Garrett has indicated that he will exercise no further oversight of the revised plans for Nobbys Headland.
The intervention of the Commonwealth has been essential to achieve the present improved design. At some point in the future it is likely that the Commonwealth will again be involved when the National Nomination for Coal River (Mulunbinda) Precinct is considered.
The Trust believes that this revised plan should be submitted to the State Government and Newcastle City Council as a private development and not under ‘Crown privilege’ as it was previously. It is clearly not a port related activity and therefore should not be considered as such. We believe there should be a low key adaptive reuse of the site. Although the revised proposal will have lesser impact on the iconic lighthouse there will still be a significant physical impact on the headland and the adjacent Macquarie Pier with increased vehicular traffic and from water and sewage infrastructure needed to support the new use.
Now that the Newcastle Port Corporation no longer has a use for the site, we would still prefer that Nobbys should be brought under the care of the NSW National Parks Service to be managed as a historic site to ensure that heritage conservation principles can be applied that promote education, research and recreation that benefit the public.
Posted by Hunter Regional Committee of the National Trust at 1:01 AM