The opening night of City Evolutions in Newcastle was a wonderful experience. People were out walking together with friends and family, appreciating the open space and enjoying the crisp winter solstice evening.   The place was alive with thousands of people wandering up and down the street; it had a very different feel to it, something I hadn’t experienced there before.  As I walked up Watt Street certain images triggered all sorts of stories I had read about the streets history.  A chain of visions during the night reminded me how rich and diverse history of Newcastle’s first street was.  The first thing to kindle my imagination was a friend pointing to the night sky and saying “Lycett’s moon is on its way”, there it was, right on cue during the official ceremony, the moon ready to appear, as if Lycett was lifting the curtain on opening night.


The strong community presence gave a different feel to Watt Street. People walking and talking together at the City Evolutions event made me think about how many others in the past had spent time in the street, what other events had taken place there. Convicts, Commandants and Government dignitaries have walked this street, and many parades and demonstrations have taken place there. We have simply forgotten what has transpired in Watt Street and the City Evolutions event is a great opportunity to tell some of these stories.

During the nineteenth century Watt Street was a popular place for marches and processions. In 1861 the volunteer Artillery and Rifle Corps participated in the annual Anniversary Day regatta held on Newcastle harbour. Assembling on the parade ground at the top of Watt Street then firing a salute from one of the guns before marching down the hill to the regatta. There was a strong public presence to watch the grand display. The old parade ground at the former military barracks (James Fletcher Hospital) was used for numerous public events and rallies. The Miners Union in 1874 organised a meeting and ‘grand procession and demonstration’.

“Two thousand miners, headed by four bands of music, marched through the town to the hill, where a concourse of people, to the number of about five thousand, assembled.”


Other demonstrations were associated with health and wellbeing of inhabitants. In 1895 there was a ‘Hospital Demonstration’ to raise funds for the hospital and Benevolent Society. The procession was a mile in length and the meeting urged all to join a ‘friendly society and provide against sickness and distress’.

The old Council Chambers a reminded of the long association the street has had with official authority and the first seat of government. 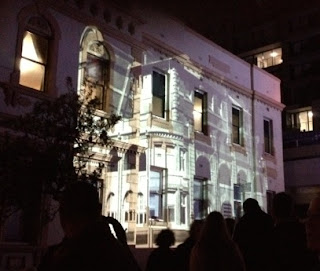 Seeing the Hunter Blood Bank so vibrant with its life-size mascot (drop of blood) having fun with the youngsters reminded me of the health history of the street. The Royal Newcastle Hospital used to be just around the corner, and the lengthy association Watt Street has had with mental health care is remarkable.  The former David Maddison building also reflecting the significant history of health, Maddison was an innovator of mental health care and helped implement radical and new approaches to medical education in NSW. He was Dean of Medicine at University of Newcastle.  The building is the perfect canvas to show historical images. 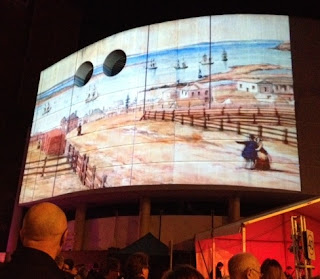 On the opening night, out of the corner of my eye I could see what looked like ghosts dressed in night dresses, about ten of them lined up ready to march down the hill. The scene reminded me of the story of the riotous girls in the 1860s who were marched from the Industrial Girls School at the top of Watt Street to the Lock Up in Hunter Street. Over many years the girls had maintained a steady series of disturbances and were described as a ‘little volcano slumbered’.  Many riots took place and one evening girls armed with iron bedsteads broke through dormitory doors and got away over fences, thirteen of them were re-captured and marched in groups of four to the lockup.  The story of the girls adds to the list those who have marched along Watt Street. 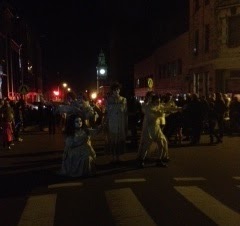 The City Evolutions is wonderful for the city. It is not only a creative and artistic event, but a cultural heritage event that has been inspired by history. The event brings to life a street full of business, commerce and history, something that also occured one hundred years ago.


“The city was gaily illuminated tonight, practically all the business-houses presenting displays of coloured electric lights” (1911)


Posted by Hunter Regional Committee of the National Trust at 12:03 AM